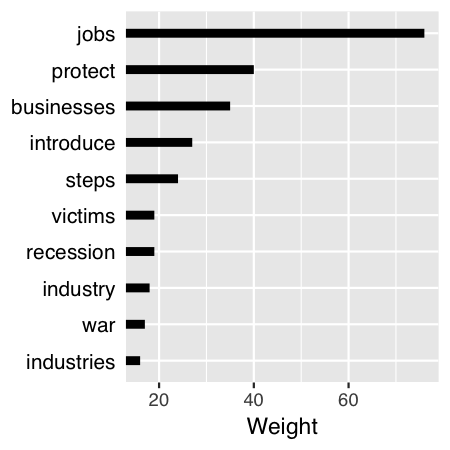 This is both an author topic and an event topic.

On one hand, this collection of words could be seen as particular favourites of the Conservative Party under Prime Minister Stephen Harper. These words appear in six out of the eight speeches delivered by the Harper Conservatives.

On the other hand, words like jobs, protect, recession, and so on, and the timing of the majority of the speeches—following the 2008 market crash—suggest that this is a group of words prompted by the economic situation at the time. This suggests that this group of words was picked up originally in response to the 2008 market crash, and that the Harper Conservatives then continued using them through the rest of their speeches from the throne, morphing it into an author topic.