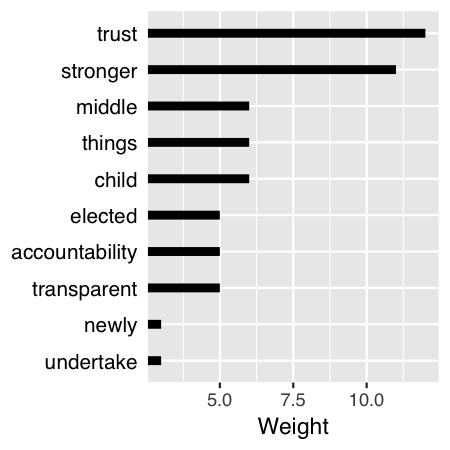 On first reading the words in this topic, I thought it was an author topic. The words trust, middle, and transparent all reminded me of the 2015 Liberal election campaign. This topic provides a good example of why visualization can be so useful.

One possible interpretation of this is that the words in this topic have become something of a habit for new governments elected in the 21st century—they turn to them in their first speech from the throne before focusing on other matters. The current Liberal government has not delivered any additional speeches from the throne since 2015, so it is not possible to explore this theory further, at least not using speeches from the throne. (In my next steps, I suggest an idea of how one might dig into this.)

Nonetheless, this topic demonstrates the utility of visualization and the importance of digging into the data!