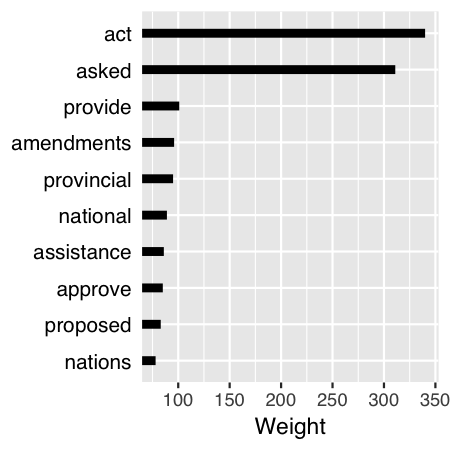 This topic, to me, epitomizes the potential of topic modelling. When the modeller first generated this topic, I thought it was just a “process” topic, reflecting words commonly used in speeches from the throne. I actually added act, asked, and amendments to my stopword list for a time, until I realized that the strong trend evident in this topic warranted further investigation.

What is so notable about this topic is that, early in the corpus, it appears regularly in the speeches, in about equal measure between the two parties, before gradually dropping off in the 1980s, with almost no appearance in recent decades.

Comparing early speeches from the throne, where this topic appears, with later ones, where it does not, reveals a qualitative shift in tone.

Consider the opening of the speech from the throne of the 23rd Parliament, 1st session, delivered on October 15th, 1957, by the Queen herself (as opposed to her representative, the governor general):

I greet you as your Queen. Together we constitute the parliament of Canada. For the first time the representatives of the people of Canada and their sovereign are here assembled on the occasion of the opening of parliament. This is for all of us a moment to remember.

In the legislative program to be laid before you, it is fitting that mention should first be made of measures to improve the lot of the senior members of our society. Accordingly you will be asked to increase old age security pensions and to shorten the period of residence required to qualify for them. Changes will be proposed in the terms of assistance offered to provincial governments to enable them to increase the payments to be made under the Old Age Assistance Act, the Blind Persons Act and the Disabled Persons Act to a corresponding level.

Compare this with the opening of the speech from the throne of the 42nd Parliament, 1st session, delivered on December 4th, 2015, by the governor general:

As the representative of Her Majesty The Queen, I am pleased to be here to deliver the Speech from the Throne.

And a standard description of the government’s policy priorities:

First and foremost, the Government believes that all Canadians should have a real and fair chance to succeed. Central to that success is a strong and growing middle class.

The Government will, as an immediate priority, deliver a tax cut for the middle class.

This is the fair thing to do, and the smart thing to do for Canada’s economy.

The Government has also committed to provide more direct help to those who need it by giving less to those who do not. The new Canada Child Benefit will do just that.

The shift in language and formality between the two is quite noticeable. This topic, combined with reading of various speeches where it is and is not well represented, suggests an interesting observation: the formality of parliamentary speech has gradually dropped since the 1950s, leaving us today with a more personable and direct style than was employed earlier in the period under study.