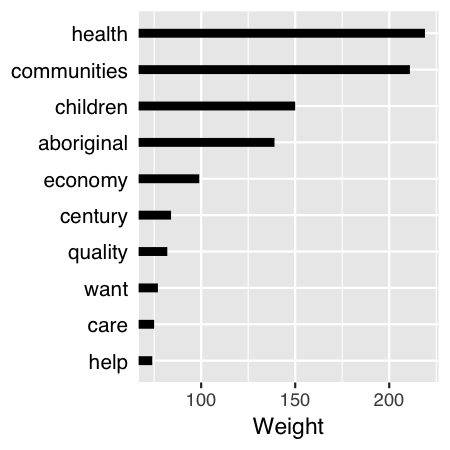 This is what I call an “issue” topic. This topic seems to group together a string of related words in what I broadly call the “social policy” sphere.

One possible interpretation of the appearance of this topic over time is that governments before the mid-1980s were uninterested in this subject. But the foundations of Canada’s public healthcare were actually laid in the 1950s and 1960s—so why does this topic not appear there?

There are a few possible answers:

This topic demonstrates one of the strengths and one of the weaknesses of topic modelling: these issues are all related, in that they are all social policy, and topic modelling correctly infers this; however, in grouping them, they may appear reduced in earlier years, which could mislead an interpretation of the results if a researcher did not combine their analysis with other knowledge.

Furthermore, this topic demonstrates a limitation of the corpus: it is not that governments did not act in the realm of social policy before the 1980s; indeed, they did so, and they probably spoke about it elsewhere. But speeches from the throne can only tell us what governments thought important enough to discuss during the speech from the throne—we must be careful not to overextend any conclusions we draw from such a corpus.